Jessica had the LonelyPlanet China guidebook downloaded onto her kindle which we used to plan out two day trips away from Shanghai. The first day trip was to Suzhou which is a canal town about a half hour away from Shanghai by train. We went on February 14 and we had a list of ten things we wanted to do or see while we were there. We managed about three…

We had it all mapped out, busses, subway, and walking, so we could make it to as many of the places in this town as we could. It was a smaller city by Chinese standards which means it was a city of about 10.6 million. Our first stop was, as the name translates to, the Garden to Linger In or the Lingering garden. It was created by a doctor as a relaxing place for his recovering patients. 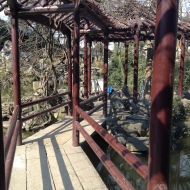 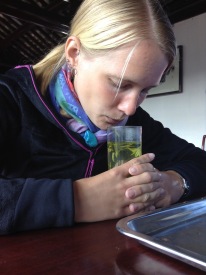 We spent three hours in the garden! And we did not even get the chance to see the whole garden. It was so peaceful there, with all the rocks and the winding buildings. There were artists everywhere painting the scenery because it was just that beautiful and relaxing. A good portion of our time was spent in the tea house, drinking tea and talking about life. The garden was appropriately named since we lost all track of time.

We took the bus on to our next destination which was Tiger Hill. Jessica wanted to see it because it had the name tiger it in and tigers are her favorite animal. According to the guidebook, the hill is artificial and is the burial place of the founder of Suzhou; he is said to be guarded by a white tiger. On top of Tiger Hill is the Cloud Rock Pagoda, and the pagoda is leaning about 2 meters from its original position. We got off at the stop outside the area only to find that again the price in the guidebook was wrong. We only took pictures from the outside. 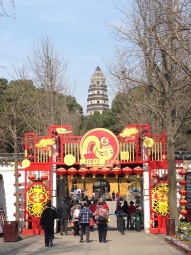 Then on to another bus and we went to Pan Gate. This one I wanted to visit because it sounded really cool. Since Suzhou is a canal city, this is the only remaining original coiled gates. According to the guidebook, from the top you can see many other historic structures. When we arrived at the bus stop, we were absolutely hungry since we hadn’t eaten anything since breakfast and it was getting late. We couldn’t see the Pan Gate, just this massive Pan Gate hotel, and no food. The only food place was an outdoor bread place. They had seasoned flat bread, lamb kabobs, and a sweet bread. Jessica and I ended up having bread for lunch and it was fantastic.

We finally found the gate, almost at its closing time. We didn’t go in because we wouldn’t have much time in there and the price was more expensive than the guidebook stated. So, back to the bus and on to our next place. We decided to treat ourselves to Starbucks because Jessica likes to collect the city Starbucks mugs as souvenirs. The next place we stopped at was closed an hour earlier than what our guidebook said and it was also more expensive.

We wandered dejectedly down the street, there was still some time to kill before our train left. It was a beautiful city and we wished we had more time to explore and we wished the guidebook was more updated (note, the guidebook was the 2015 edition). We both agreed that if we had lived in a city like this one, with a good public transportation system and lots of history and close to other cities, then our time teaching together in China before would have been more enjoyable. Since we only had bread for lunch, we stopped for some dumplings as a Valentine’s Day date before going back on the train.