Compared to other cities I have visited in China, Shanghai did not impress me. I was there with Jessica for four full days, February 12-15. The first day we tried hitting up highlights of the city and the other days we had other activities planned. It could be circumstances of the first day contributed to my unfavorable impression of the city.

I arrived in Shanghai late February 11. My flight with Spring Airlines was unpleasant; first with the luggage ordeal, then I was stuck on a small aircraft with seats that would not recline even a little bit. Also any small handheld device with wifi connectivity must be turned off during the flight, flight mode is not acceptable, however laptops and tablets are acceptable.

Shanghai is much much colder than Thailand, like 50 degrees Fahrenheit colder. I bought a jacket and long underwear in Thailand and I was so glad I had them. I would wear the long underwear to bed every night because the heater in the hostel room was broken. When it comes to cold weather, I am a bit of a wimp so being able to see my breath was not okay. As soon as I stepped off the plane I wanted it to take me back to the warmth of Thailand.

Jessica met me at the airport because she said there was no way I could make it to the hostel on my own since the public transportation had closed by the time I landed. We then discovered I couldn’t remember my PIN number for my bank card so I could not withdraw money from the ATM. Jessica had not gotten paid from her school yet either. She had enough money on her for our taxi to our hostel.

February 12 was our day to explore Shanghai. First on our list, was to find a bank to see if I could get money. I had frantically emailed my father the night before, he went to the bank and made sure they weren’t blocking my card. They suggested trying to get a cash advance on my credit card from a bank in China. It was a Sunday so many banks were closed, we found three banks open and none of them would give a cash advance. I had some baht with me that I was able do convert. My father was about ready to send me a money wire but Jessica and her father able to get me sorted out. It is a rather unpleasant feeling being in a foreign country without access to your finances. My father and Jessica’s father were the real heroes of the day. 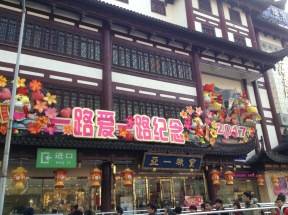 Using the Lonely Planet guidebook on Jessica’s kindle we planned a few things we would like to do during the day. The first thing we were going to do was visit the Shanghai History museum because the guidebook called it fun and interactive. Getting off the subway we looked at the area map on the street. We did not see it on that map so we moved down the street, still not on that map, we looked at about five maps and the museum was on one map. We started to go in the general direction of the history museum. When we ran into the Bug museum we knew we had gone too far. Jessica used her awesome Chinese skills to ask directions but the woman said she had never heard of that museum. We figured the museum must have closed.

We took the subway to the Bund because it is a touristy place to go. The Bund is like a river walk and from there is a nice view of the skyline. Jessica told me a bit about Shanghai. The city is trying to be a modern city so they are systematically removing traces of their traditional Chinese streets. Perhaps that is why I’d didn’t like Shanghai that much, they were too modern. The city felt like a futuristic space city. It saddens me to see Asian cities trying to be “modern” or “western” to the point where they erase their history. (The reason why some of the city pictures are so hazy is because the day was kind of smoggy) 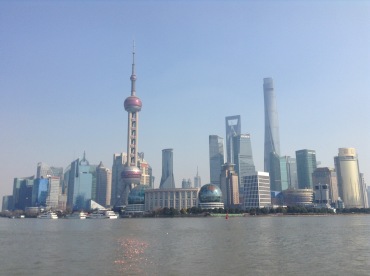 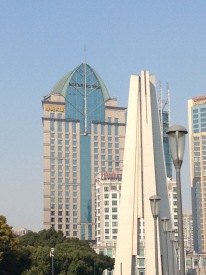 We walked to our next destination which was Yu Garden. We followed the signs and the map in the guidebook but still couldn’t find it. It felt like we were just walking in circles around where we wanted to go. Close but still so far. We just wandered the area, ate lunch, I got sugar coated fruit on a stick which I loved so much last time I was in China. The sun started to set and it started getting colder so we decided to call it a day. The first day was not as we had planned or expected but the next day was Disneyland and it’s the happiest place on earth.