Khao San road is quite popular with backpackers traveling through Bangkok. You can find everything your local Southeast Asia backpacker could need: restaurants, clubs and bars, souvenir shops, tattoo parlors, massage parlors, tailors, tour companies, etc. As much as I enjoy going to Khao San road to get a massage at a place where I can get a 2-hour Swedish oil massage for $20, some people do not realize there is more to Bangkok than that area.

I went to Bangkok this weekend and decided to visit Ko Kret. My guidebook says it is a manmade island and home to one of the oldest settlements of Mon people. The Mon were a dominate culture in Thailand and Burma during the 6th and 10th centuries, but now are on the verge of being wiped out. The island is known for hand thrown terracotta pots. My guidebook had information on how to get to the island and a bit more about what to do on the island. I did a little more digging about the island and came up with the same information. Having multiple resources saying the same thing is a good thing because there is a higher chance that it is correct information.

I hopped on the BTS to victory monument where the sources said to catch bus 166 to Pak Kret and then walk to the ferry crossing. Sounds easy enough. Except at victory monument, there are four bus stops, all at different locations around the monument. Of course, the one I wanted was exactly opposite the BTS station. Then I waited for 45 minutes for the bus to arrive, plenty of time for me to grab lunch while waiting.

Finally, the bus arrived and I got on. The woman collecting fares did not speak English. Word from the wise: Pak Kret is pronounced like pocket; if you say it, any other way people will stare at you like crazy. Get off at the Tesco lotus near the underpass, that road will take you to the pier. Since it was my first time in the area, I took a 20-baht motorcycle taxi there thinking I would walk back once I knew the way.

The ferry was 2 baht and a pleasant ride across the manmade canal. It was neat to watch the fish swim alongside the boat to see if they could get free food. Upon arrival, there is a temple to the right, which I poked around in. One of my sources said there was a market in the area by the pier. At the pier, you can rent pedal bicycles for 40 baht a day. The island on the map looked small enough and one of my sources said it was easy to do the island in a day just by walking. Pro tip: get the bike, or at least have sunscreen, a hat or sunbrella, good walking shoes, and lots of water.

Map of the island [bigger than it looks]

I turned left on the trail around the island, meandering through pottery village. There were little shops and restaurants, very cute, quite twisty and turny. I was glad I did not rent a bike for that part, almost got ran over by cyclists taking the corners too sharply. A man gave me an English version of the island map along with his phone number in case I got lost or needed any help.

But soon you get out of the houses and shade, into the noon sun out in the “countryside” of the island with few and far between houses. And then I ran out of water. Fortunately, for me there were plenty of trashcans around to throw away my water bottle. People who passed me gave me funny looks because I was out walking in the sun. I came across a sign that said batik shop to the left. So I turned because I was curious and I really needed water.

There was a small cluster of houses near the batik shop. One woman came out of house as I was walking up the road. She spoke English and commented on the sunshine. I agreed that it was very hot outside. She invited me to sit with her and have some water. We sat and chatted for almost a half hour while I drank water and cooled off. Her kindness made the day better and made it special.

Stopped by the batik shop after my visit (could have gotten water there, so even if the nice woman did not offer me water, I would not have dehydrated).  There was not much in the shop but there were still some cool things. I think batiks are amazing and I love working with them when I sew. For those of you who do not know, batiks are a special kind of fabric where the dye process creates the same pattern on both sides of the fabric.

Since the shop was off the main circuit, I had to walk back to the trail to continue my trek around the island. I was hot and sunburnt but invigorated from my stop off the beaten path. I was determined to make it all the way around the island, all 5 kilometers. Eventually more houses started popping up and I ended up in a market.

I was so glad to be around other people again where I could get many cold drinks. You could buy a souvenir mug at almost any drink stand. It was fun to look at everything the vendors were offering. If you go, look out for the man with the wooden t-Rex puppet, he roars. I stopped by a stall at got some fried flowers to snack on. They were pretty bland and tasted exactly how you would think flowers would taste. The woman selling them put sweet and spicy sauce on them, which gave them a nice flavor. 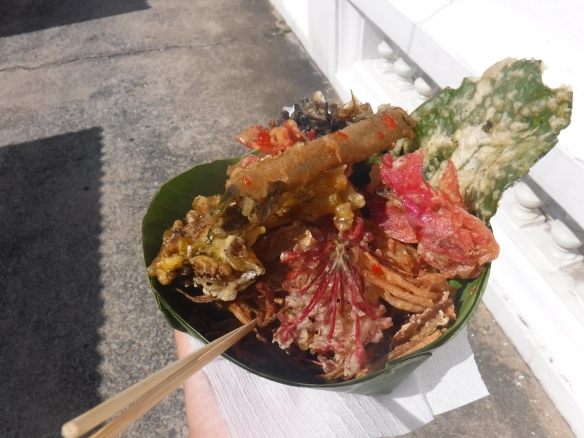 At the end of the day, I was so tired that I took a motorcycle taxi back to the main road. Then I ran across four lanes of traffic and a median to catch bus 166 because there was no way I was going to wait 45 minutes for it to come. At the start of the day, an old woman tried to sell me ointments for my joints. I declined since I do not have joint pain. However, she must have known something I did not because at the end of the day, I was so exhausted and my knees ached from walking on the cement.

The whole day, from the time I left my hostel to the time I arrived, took 7 hours (which included all the waiting time). If you are going to visit, the highlights were the pottery village and market. If you have a desire to take the loop around the island, rent a bicycle. Though a bicycle is difficult to get through the pottery village and impossible to get through the crowded market. Seriously. Rent the bike. Drink water.