We woke up earlier this morning to dive at “Rocky Point” or “North Point” off island 9, before heading away from the Similan islands to Koh Bon for our afternoon dives. The dive site was a whole bunch of boulders, giant rocks the size of houses, and the way they were leaning created a bunch of spaces to swim trough. This site had more live coral than the other sites, but you could see where the coral was starting to bleach. The Frenchwoman and I saw a reef shark, and her husband saw a turtle. Our guide was not happy he missed those, he was too busy looking for flatworms. We saw a blue ribbon eel, which are supposedly hard to find. At the end of our dive we saw a sea snake, can’t get away from snakes even in the ocean. The second dive of the day was at Koh Bon, an island north of the Similan islands but still considered part of the Similan island marine park. Koh Bon is different than the other diving sites. It is much more a traditional reef with a drop off. It is much more blue as well, which is a funny thing to say since the ocean is blue. The visibility wasn’t as good here as other sites, and the drop off made everything more blue. Manta rays are often found hanging around Koh Bon so we went looking for them. The reef itself was teeming with fish, we saw a giant moray eel that looked like it was almost something’s snack. The Frenchwoman pointed out another reef shark, just on the edge of the visibility. The first time I saw the manta ray, I almost choked on my regulator. It just came out of the blue, all of a sudden it was there, and it was massive. Our guide said it had about a six meter wingspan, so it was big. It was beautiful. We swam along some more and the Frenchwoman pointed out another farther in the distance, I turned around and the big one was back. It headed right toward me and passed so close to me I could have touched it. The smaller one came closer and passed right underneath us. If we extended our legs we could have stood on it. The Frenchman touched the big one and our guide chewed him out for it because that is a big no no. That had to be one of the best experiences I’ve had while diving. It was amazing to be staring into the blue then slowly see the shape of a giant manta ray come in to view. The ocean breeds large creatures.
Dive number three was at Koh Bon again. We saw lots of trumpet fish. There were five other boats at Koh Bon so there were lots of divers underwater. We saw the manta rays again, and it was just as exciting as the first time. It was rolling and unrolling its two front things (that’s a technical term because I don’t actually know what they’re called) and our guide said it wanted to play. We saw it several times before it swam over a woman who wasn’t paying attention and she blasted it with bubbles. The manta ray shot off, when they want to they can move fast, never to be seen again. The Frenchman found a big octopus, our guide tried showing other people but they were more interested in trying to see the mantas again.

We got snack time between dives three and four. Sometimes it felt like all we did was eat and dive, which is not a bad life. Our guide told me the snack was spicy, but it didn’t look spicy, it looked like cake. I asked another guide if it was spicy and all the guides said it was a spicy snack. It was pineapple pan cake which is not spicy at all.

For the last dive of the day we moved to Koh Tachai and dove at the pinnacle. It was a beautiful soft coral reef with colorful corals and diverse fish. However there was such a strong current there was no time to enjoy the reef. There were loads of starfish, I enjoyed the starfish. They became my current markers, just have to swim to that blue starfish, now to the giant puffy starfish, now to the skinny starfish. We had to cut our dive short because the current was so bad everyone was getting tired. I was also getting cold because the thermocline was much higher here. Thermoclines are cool when you are properly insulated. My wetsuit is for warm water and below the thermocline the temperature drops about five to ten degrees Celsius. Though, you can see where they are in the water (they shimmer in the water, and looking at things through then make the things look slightly warped) so you can avoid them unless there is a current forcing you into one. 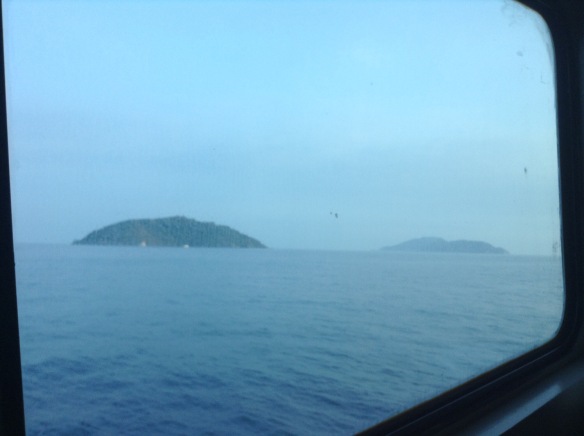