It was quite the happenstance that I ended up on the live aboard (see earlier blog post). The boat was called the Peter Pan. We boarded on April 17 in the evening, the divers were me, a French couple, and eight Argentinians. The boat can hold 22 divers so there was plenty of space for all of us, I even got my own room! One thing I learned about the boat is you need to watch your head going up and down the stairs (otherwise you get a painful reminder for the rest of the trip, as I learned from experience) (also from experience, the cookies did not have chocolate between them but rather a sort of jelly, such a disappointment).

It was a three hour trip to the Similan islands. We had a boat briefing, a great dinner on board (in my experience, boat food is always good food), and then went to bed. The movement of the boat made me feel a little queasy but not as bad as I thought it would. I slept really well the first night, rocked to sleep by the moving boat and the hum of the motors as my lullaby.

April 18 was our first day of diving, with four dives throughout the day. Our first dive was “Anita’s Reef” on islands 5 and 6 in the Similan islands. The name Similan is derived from the Malaysian word for nine because there are nine islands. There’s not much in the way of coral, most of it was dead. In the sandy parts we saw garden eels; they were so cute. The largest were no bigger around than my little finger. When we would get close to them they would hide in their holes. We also saw a giant moray eel. When they say giant eel they mean giant eel. This eel was the size of my leg (length and circumference), and it did not care when we got close to it. Fish with teeth kind of freak me out, fish should not have such pointy teeth. I saw my first lionfish; I ibow they are an invasive in most parts of the world but it looked so cool. A little cleaner wrasse came and rubbed up against my mask during the dive. Cleaner wrasse usually hang out around bigger fish and clean them and they aren’t shy of divers; I guess this one thought I was a big fish. The dive guide pointed out an octopus hiding behind a rock when we got close the octopus climbed over the rock and hid under it. It’s amazing how graceful and fluid they move, they also move quickly. The Frenchwoman pointed out another octopus climbing out from under a rock. I have never seen an octopus in the wild before and I saw two on my first dive.

After breakfast we had our second dive. This one was at “West of Eden” located at island 7. There were a lot more soft corals here, and boulders the size of trucks. We saw another lionfish hiding under a rock. We also saw a spiny lobster, its antenna looked to be about a foot long; out five guide said later that it was a small one and they get much bigger. There were a lot of schooling banner fish; I had seen banner fish in Koh Tao but never a school of them. While watching the banner fish I saw two unicorn fish. The unicorn fish looked like Pinocchio with a super long nose, if the nose was on his forehead. Our guide pointed out an anemone crab that was the size of my thumbnail. When we got close to see it better it raised its pincers to warn us off.

I felt like a princess on the boat. The crew prepared all the diving gear so we did not have to set up or disassemble our equipment or change our own tanks. One time my straps were twisted and I was having trouble buckling them so one of the crew members came and buckled me into my bcd. They helped me in and out of my wetsuit. One of them even put my fins on for me. But really, I felt like Cinderella, a total princess.

I was in a group with a dive instructor, and the French couple. The French couple had more dives than I did so they could have been better divers than me because of all their experience. The first dive was rough, it had been a couple of months since they dove and they were all over the place. At first the woman didn’t have enough weight then she had too much weight so she was bouncing along the bottom (that’s bad), her husband didn’t have enough weight so he was floating upside down for the whole first dive. They evened out as we dove more.

After the first dive the dive instructor said I was basically a fish. He kept trying to get me to do my dive master with their shop. He said I could work here in the winter, and teach or go back to America in the summer. The Similan islands are a national marine park. During monsoon season, May to October, the park closes because conditions are bad for diving.

The third dive of the day was at the “Breakfast Bend” or “Three Trees” on island 9. It was very much the same as the other two dives except there was a lot more coral bleaching at this site (dead coral). At one time I bet this reef was stunningly amazing except global warming has been killing off the coral. There were lots of stretches of sand. That’s not to say the sand parts aren’t interesting, they just don’t attract as much life as the coral parts. In the sand there are a lot of the garden eels. There are also goat fish which are fun to watch. Goat fish are pale fish with two tentacle like things under their mouth which they use to dig in the sand looking for food. There are also partner goby, which share a hole in the sand with a shrimp. You can watch the shrimp pushing sand around while the goby stands guard. The book with the dive sites in it said we could possibly see some leopard sharks, but no such luck.

We got snack and beach time between dives three and four, we had to wait for the sun to go down for our night dive. The beach we went to had white sand, actual white sand. I brought the white towel from the boat and it blended in to the sand. The sand was so fine it was like powder; the water was a crystal turquoise. It was a paradise. We lounged on the beach for an hour before heading back to the boat to watch the sunset. It was a disappointing sunset and we had to do the dive briefing before the sunset had finished. In my experience, the colors in the sky are more beautiful once the sun is out of the sky but most people assume the sunset is over once the sun is gone.

Our last and final dive of the day was at “Donald Duck Bay” (where the beach was) off island 8. I have never done a night dive before but I’ve heard they are cool and I’ve wanted to do one for a while. Night diving is different than day diving because it’s dark. No duh… but not like a little dark, it’s really dark, as in you-can’t-see-anything-without-a-flashlight kind of dark. It was a scary kind of dark, you couldn’t tell which way was up and which way was down; the darkness had a way of making you feel very small and insignificant. However the dive itself was awesome. We saw another giant moray eel, except this one also had a cleaner shrimp with it. I saw two more lionfish, these were smaller and more red than the ones from the earlier dives. It was amusing to see the fish sleeping in the corals. There was a rocky section with lots of bleached coral where a school of smallish blue trigger fish were sleeping. The trigger fish were nose down in the cracks and crevices of the dead coral with only their tails sticking up. I found the Christmas tree worms (little worms that look like colorful Christmas trees) don’t like the flashlight light; I would shine the light on them to look at them and poof they would hide. You need to find entertainment where you can. 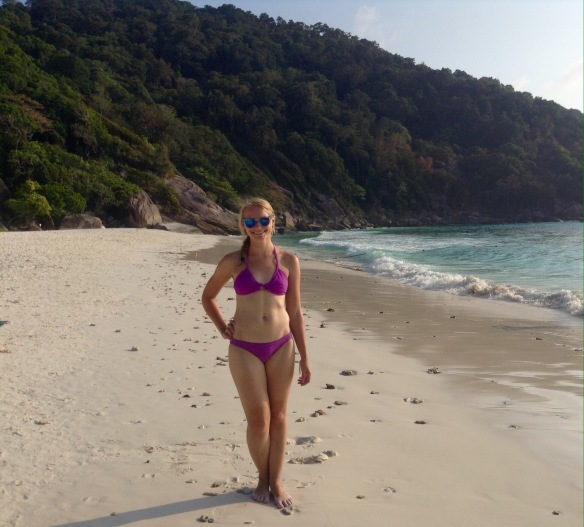