April 1st I woke up at 4:30am to leave the hostel at 5am to catch the sunrise at Angkor Wat. We had to leave so early to purchase tickets for the temple complex. One day admission was 20$, three day admission was 40$, and seven day admission was 60$. I planned on spending three days in Siem Reap so I purchased the three day pass, it saves time later because I didn’t have to stand in the line again. They took your picture for the temple pass so you couldn’t give it to someone else. Mine was a lovely 5am-I-just-woke-up picture, no joke.

The sunrise at Angkor Wat promised to be amazing. I saw pictures of it, the sunrise over the temple, beautiful colors, all reflected in a pond. It was not that. We were herded into the temple complex and the reflecting pool was so small if you aren’t at the edge you couldn’t really get a clear shot. The sunrise was sadly unspectacular. All of a sudden you realized it was light outside and the sun had risen, no colors, nothing. The only reason I got colors in some photos was because my camera has a special setting for sunsets/sunrises which draws out the colors.

Angkor Wat itself was amazingly impressive. The complex was massive, I wish I had a guide to lead me around and tell me different things about it. If I knew more about it, I would share. I can see why it is one of the most beautiful places in the world. But there was little to no shade in the complex, even in the morning it was beastly hot, and the day only got hotter; water was a must.

After Angkor Wat, we went to the Bayon temple; our tuk tuk driver stopped at the south gate so we could take pictures. I would have loved to see this place when it was whole. You can tell the Bayon temple from all the faces carved into it. It’s a Buddhist temple (actually somehow they are all Buddhist temples, and some are Hindu as well, I don’t know exactly how a temple can be Buddhist and Hindu at the same time. I think it has something to do with the temple was built for one religion then later converted to another religion).

The Bayon temple complex was much more spread out than the Angkor Wat tamper complex. Our group got spit up during it and then my half got lost. Everyone was following me, but I was just as turned around as them. Our driver said he would meet us at the west gate; after hiking up and down and all around several temples, you get turned around. We met up with the rest of our group by the west gate but our driver was missing. He had gone in search of my group. It was a nice rest in the shade, and we had cold drinks from a nearby restaurant. The break was much needed, the heat was making me temple out.

The last temple of the small circuit tour was Ta Prohm. This temple was made famous by the movie “Tomb Raider,” which was filmed there. This temple was much more run down than the others. There were places you couldn’t go because it was collapsed or in danger of collapsing. There were trees growing all over the temple and the fallen rocks. It was my favorite of the temples in the small circuit, seeing nature reclaiming the temple; it was exotic and beautiful. It made me feel like an explorer. There was one tree that was silver, a guide said it was naturally the silver color. These temples were amazing.

We got back early in the afternoon, and in the afternoons the hostel has a food tour where you can sample local foods. I wanted to go but they needed four people to have the tour. The guidebook I had described Cambodian food as “gastronomic delights.” I was super excited to try all of it and I was a little let down. The food tour might have helped with this. I tried amok, which is a fermented fish paste mixed into different types of fish soups. It was flavorful but bland. All the food I tried was flavorful but bland. A lot of it used coconut milk as a base, which is tasty yet bland; the amok was tasty yet bland. The most exciting thing I ate were frogs. Frogs taste like chicken; if I didn’t know I was eating frogs I would have thought it was chicken. I did enjoy the fresh fruit shakes for $1. Mangos were in season so those were the best; they would peel a mango, peel the fruit into the blender, add ice, add some coconut milk, and blend it, perfect after a long hot day.

The second day in Cambodia I went off the beaten path with a woman from France. We went to the to the Rolous group temples (three separate temples), Banteay Srei, and the Women’s temple. I almost enjoyed this day more than the small circuit. We the the Rolous group temples all to ourselves, save the temple employees. The Rolous group temples predate Angkor Wat by almost two centuries. Our driver stopped for lunch and he ordered a traditional fish soup for us, it was delicious yet bland. We put leaves from the jungle that tasted like basil in our soup which helped the taste a bit.

We visited Banteay Srei (the Women’s temple) after lunch. Actually we stopped at another temple first but I can’t remember its name. The two temples are rather far from the rest of the Angkor temples. We traveled in our tuk tuk down red dirt roads, past farms and real everyday Cambodian life (even passed a couple weddings). The Women’s temple had to be my favorite. Most of the carvings were still intact whereas in other temples they were worn or faded. I also liked how this one was off the beaten path, not as many tourist as other temples.

The Frenchwoman had been using the same tuk tuk driver the whole time she was in Cambodia. She asked him if she could try some panfruit, so he stopped for us to try it. It was cold, tasteless, and slimy. It was like eating jello with strange liquid inside it. I will put panfruit on the list of “I will not buy this again but if someone offers it to me I can eat it to be polite.” She told me about a fruit the driver shared with her the day before and how good it was. The driver overheard her so he stopped for more fruit. This fruit was so good! It was sweet and juicy and very sticky. The driver told us we could get the stickiness off our hands by running them through our hair; I just used soap and water.

All over Siem Reap were the fish doctors, where you could put your feet into a tank of water and have the fish nibble the dead skin. It is a super touristy thing but I was just so curious. I went to a massage place where I paid $2 for a half hour and a Cambodian beer to go with it. My feet aren’t ticklish but this tickled! After a while I got used to the nibbles. It was a slightly pinching feeling. The whole experience was a lot of fun. The people forgot about me so I sat getting my feet nibbled for an hour, and even after an hour I had to ask for the towel so I could get out.

Day three I went to the holy mountain where I saw the 1000 lingas, the giant Buddha, and the waterfall. It took us an hour to drive to the mountain and an hour to drive up it; the car in front of us broke down so our driver got out to help push. The 1000 lingas are carved into the riverbed, they were very cool to see. Lingas are commonly interpreted as phallic symbols associated with the Hindu god Shiva. After stopping at the river we went to the giant Buddha carved into the mountain. Our driver was able to tell us it was very old but he didn’t know much more than that. We did a washing of our feet, hands, and face. After the Buddha we went to the waterfall. The waterfall was just a small one, our guide said it is bigger during the rainy season and there are a lot more people there during the Buddhist new year festival. The whole experience on the mountain took about half a day, I was able to squeeze in a nap and the sunset at Angkor Wat. The sunset at Angkor Wat was similar to the sunrise, unspectacular. If you choose to see the sunset somewhere, I heard there was a sunset hill where you could watch the sun set behind a temple. Looking at Angkor Wat from the entrance you face east, it was more of “going to Angkor Wat right before sunset.” The temple closed at 6, the sun set at 6:30; we were out of the temple complex before the sun set. 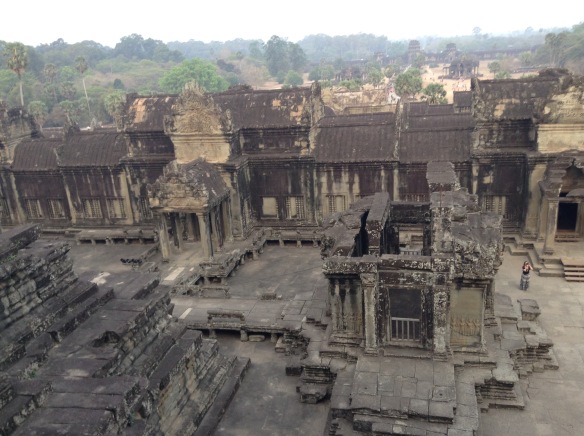 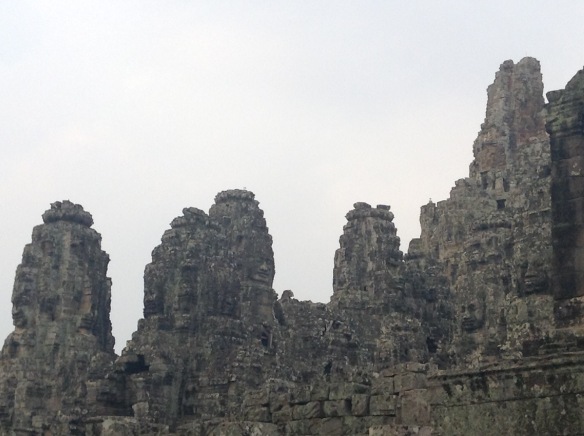 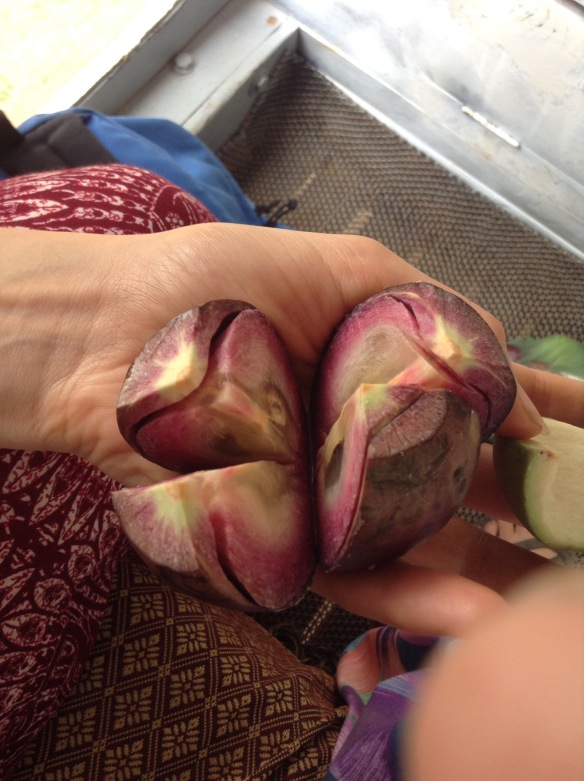 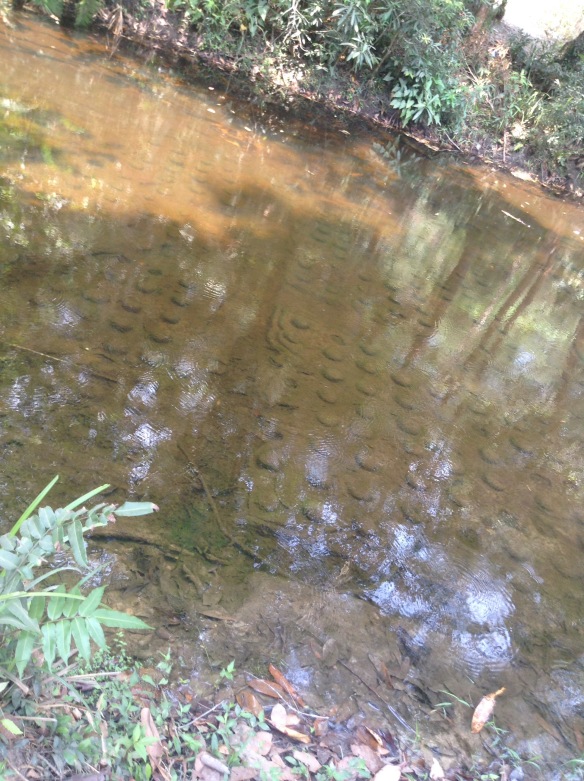 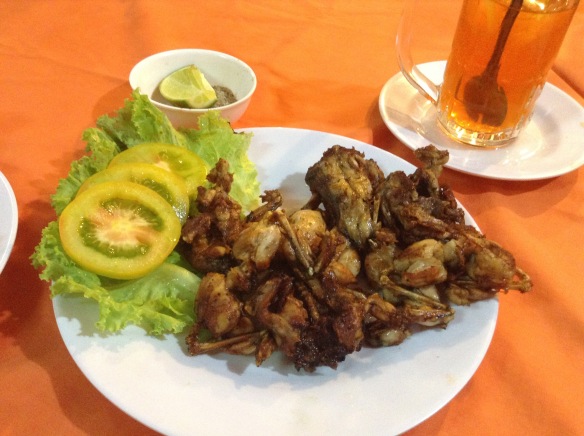